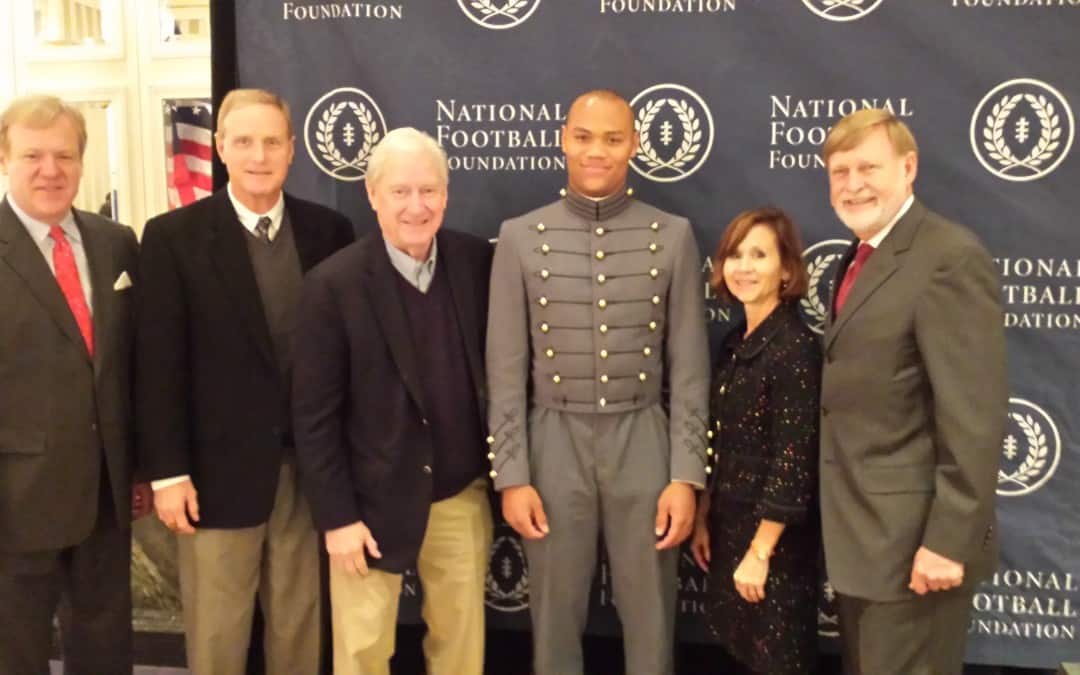 The National Football Foundation (NFF) named Kenneth Brinson Jr. one of the five recipients of this year’s 2015 NFF High School Scholar-Athlete Award. Prior to being one of the five recipients of this award, Brinson maintained a 4.1 GPA, excelled as a three-sport athlete, led his football team for two-years as the team captain, and made one bold decision to attend the United States Military Academy and play linebacker for the Black Knights.

The 6-foot-2-inch, 235-pound defender represents the Touchdown Club of Atlanta NFF Chapter of the South Region. He attended high school at the Marist School in Atlanta, and gained the respect from his coaches and teammates on and off the football field. Brinson was voted the most valuable lineman by his teammates, and he set the record for most career sacks while at Marist. Although football is his main interest now, in high school Brinson also excelled at wrestling, winning two national championships, and was also great in track and field, winning the state championship in the discus throw.

Not only did Brinson lead a well-rounded athletic life as a four-year letterman, he also led a balanced academic and social life as well. Brinson left the Marist School in Atlanta with a 4.1 GPA and four consecutive years as a member of both the National Honor Society and the Honor Roll. For three years, Brinson was a National Merit Finalist and Academic All-American. Brinson also enjoys playing trombone; he twice accepted the Instrumentalist Magazine First Chair award. He also enjoys giving back to his community through organizations such as Habitat for Humanity, Throw1Deep Club, and A Better Chance.

Despite all the individual success and recognition coming his way, it is apparent that Brinson values being a part of something bigger than himself: a team.

Brinson thanks the multitude of coaches who invested so much of their time in him and most importantly, his parents.

“I’m thankful for the hard work my parents put into me. I want to keep moving forward and keep doing the best I can,” Brinson said. Brinson does not wish to remain stagnant after receiving the award; he is committed to progress. These values of progress and dedication were instilled in him during his time as a football player at the Marist School in Atlanta.

“At my school [Marist] there was a big emphasis on discipline, doing your job, and working hard; I think all of those helped to guide me,” Brinson said.

There is no shortage of hard work whenever Brinson is around and his high school discipline seems to have paid off; Brinson has played in every game for the Black Knights this season.

Football shaped Brinson in many ways, one of which includes his desire to support his team and take charge when the time is right.

“The biggest thing I learned, and am still learning from football, is first being able to be a part of the team, know your role, and be able to follow others. And when it’s your turn, your time to lead, be decisive,” Brinson said.

Brinson has a strong history of supporting his team on and off the field, and it is evident that he plans to continue to do so with his new team at the United States Military Academy.