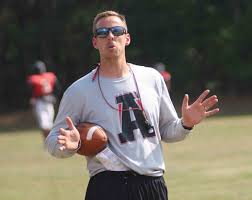 As a result of his Cougars’ clawing Creekside 51-35, to run Alexander’s record to 8-0 overall and 6-0 in Region
5-AAAAAA, the state-ranked Douglasville program has proven to become the model of consistency under Combs.

Now in his seventh year at the helm of the program, at a school which has only known 13 winning seasons in its
31-year history, and had not produced even one winning season in 15 years until Combs stopped the skid, beginning
in 2013 with an 8-5 record, the man, who became the seventh head football coach in 2010 at a school that began playing
a varsity football schedule in 1986, deflects taking too much credit for the improved gridiron fortunes of the Cougars.

“The difference is that the players have gone from hoping to win, to expecting to win, as their confidence level has
elevated, due to their hard work, and that of assistant coaches, who have been willing to put what it takes in in the off
season,” Combs said.

But the results speak for themselves. Though it took him his first three years at Alexander, which produced only
eight victories, before seeing the turnaround that has since transpired – four consecutive winning seasons
for the first time since under Vernon Wilkes achieved that feat from 1989 through 1992 – for the culture of
the Cougars to change; change, indeed, it has.

In fact, though the Arizona native, who moved to Georgia in 2006 to become the defensive coordinator at Lithia
Springs High School, won’t look any further then the next game on the schedule, it would appear likely that
the Cougars have a chance to win nine or more games for the first time since the glory days of Jim Clay, the
father of Justin Clay, the Chairman of the Board of the Touchdown Club of Atlanta, the organization, of course,
honoring Combs at this time.

The Cougars have known only two nine-win seasons, both produced under Clay, the first in his first year at
the helm (1993), and his second in his second-to-last season at Alexander (1996).

In fact, realistically, under Combs, the Cougars should have a shot at winning at least 10 games for the first
time since 1994, when Clay’s 10-2 record became the best in the program’s history, and which remains the
best to this day, some 23 years ago.

It would be hard to find a coach who believes more in the situation that Combs has at Alexander than he does.
While some say “it takes a village to raise a child,” the 38-year-old Combs says, “It takes a community
to make a program.”

Added Combs, “This entire program is humbled to be a small representation of this community…We are all just
a bunch of blue collar workers trying to get a little respect.”

And, as a result of what has taken place the past four years under the tutelage of Combs, who says “success
breeds success,” the football program at Alexander seems to be clawing its way to state-wide prominence
one game at a time, one play at a time, living in the moment, as directed by its inspirational coach.