2017, Coach of the Week, Southwest Dekalb 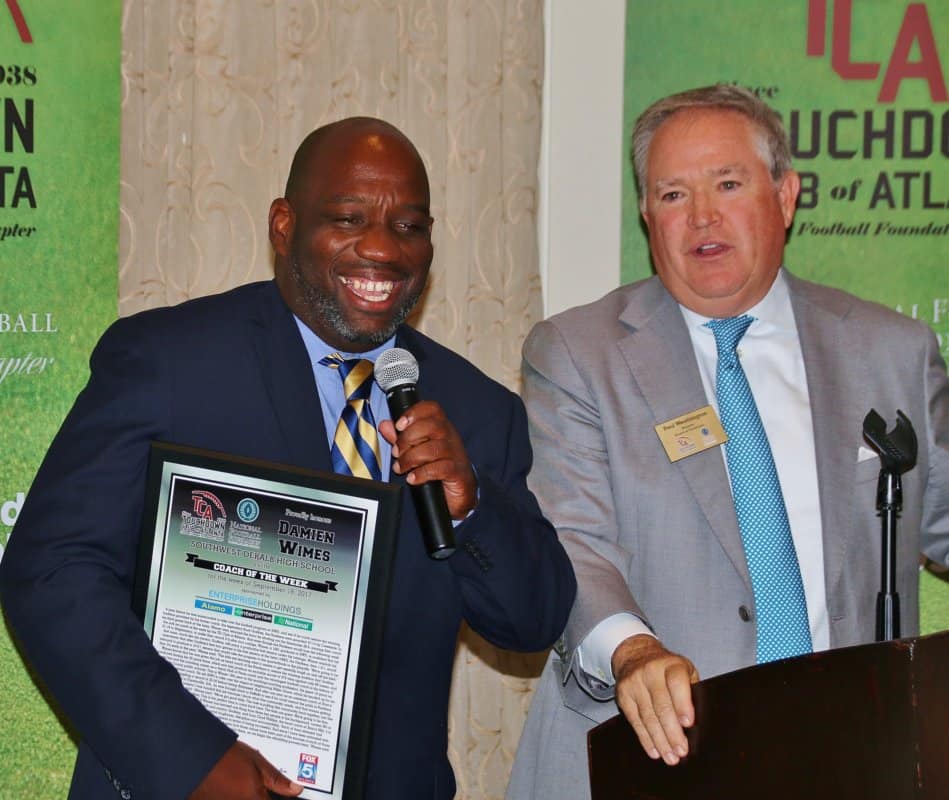 A year before he was summonded to take over the football program at SWD, and see if he could restore the winning tradition provided by his former coach, the legendary Buck Godfrey, the Panthers were pounded 47-14 by Creekside. In his third game back at the helm, Wimes’ men returned the favor by shutting out the Seminoles 28-0, earning their coach the nod as coach of
the week by the TD Club of Atlanta.

And even though the Panthers would lose the following week 31-18 to Stephenson, to make their record 2-2 after four outings, Wimes, a 1991 graduate of SWD, is confident that his first team, much like his mentor, Godfrey, will enjoy a productive first season under his tutelage.

Wimes reminds his interviewer that after Godfrey’s first four games in his first season at the helm (1983), the Panthers, then 1-2-1, would rebound to produce a 10-3-1 season that would take the program to the quarterfinals in the playoffs.
“We’re going to be fine. It’s early in the year,” Wimes said. “The kids are learning what it means to get mentally tough on and off the field.”

Wimes knows that he was given the job as head coach of the Panthers to restore the winning tradition that Godfrey produced during his 30 years there, which saw him produce an enviable record of 273 wins against only 89 losses, and saw him end his coaching career as a literal Hall of Fame coach and the winningest football coach in the history of DeKalb County public
schools.

This is Wimes’ 18th year in the teaching/coaching profession. He spent 10 years as Godfrey’s assistant coach. He left SWD to take over the reigns at neighboring Miller Grove, which he headed up for six years while compiling a record of 30-30 before being dismissed. And after one year as an assistant coach at Starr’s Mill High School in Fayetteville, GA., he was brought
back to DeKalb to see if he could restore the pride in Panthers football again.

“I believe I was handed this job because I know what this community needs, and that means getting everyone back in the fold,” Wimes said. “We’ve got good kids. The task is pulling this community back together, just like it was under Coach Godfrey. This is the perfect time to come back here. The kids are great. We’re going to be fine. We’re going to win our region.”

If Wimes has learned one thing from three key people in his background, current AD at SWD, Kathy Walton, his former coach and mentor, Godfrey, and from Chad Phillips, the head coach at Starr’s Mill, it is the importance of three things: mental toughness, discipline and accountability.

“Each of them stressed and emphasized the importance of those three aspects in terms of being successful. And since I have been entrusted with the responsibility of rebuilding this program, and seen how those values have been part of the success of each of those mentors of mine, you can be certain that I, too, will employ them, as we begin the rebuilding process here,” Wimes said.