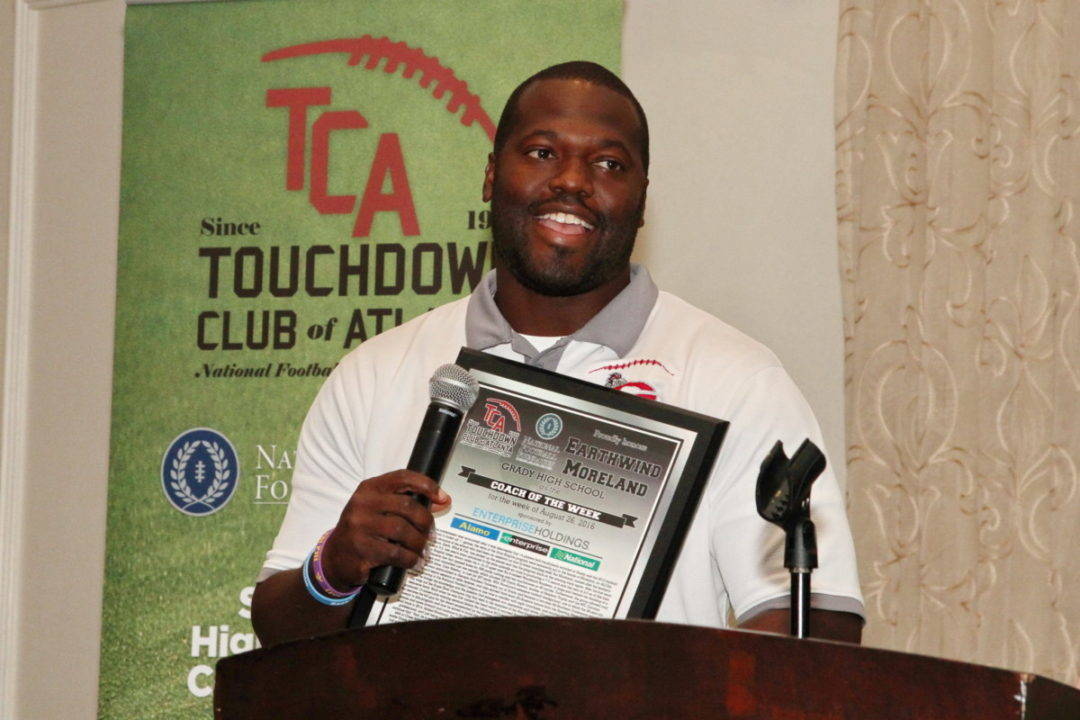 Earthwind Moreland, Coach of the Week, Grady High School for the week of August 26, 2016.

When his predecessor was terminated after it was discovered that 14 players had fraudulently enrolled
at Grady and the 2013 football team had to forfeit all 11 games, the reins of the Gray Knights program
were summarily put in the hands of Moreland, an All-City football alumnus of the school who had been
an assistant on that ill-fated coaching staff.

But Moreland, named after his mother’s favorite band, Earth, Wind & Fire, has picked up the pieces and has
the program back on the winning track again. After his first team in 2014 went 5-5, last year’s team advanced
to the state playoffs en route to producing a 7-5 record and this year is 2-0 as of this time.

The Gray Knights’ latest victory came via a 14-10 upset over No.2-ranked Woodward Academy, in large part
behind the blocking of a stalwart offensive line that opened holes for 308 yards rushing and two touchdowns
on 40 carries. Furthermore, the group allowed only one sack and committed just one penalty, which allowed QB
Caylin Newton, brother of Heisman Trophy and the NFL Carolina Panthers’ QB fame Cam Newton, to rush for
207 yards.

With Moreland’s extensive football background, one in which the 39-year-old native Atlantan matriculated
to Georgia Southern University out of Grady and became a two-time All-Southern Conference selection
his junior and senior seasons a wide receiver, and also earned third-team All-America honors from the Sporting
News his senior year, before playing in the National Football League at one time or another with eight
franchises, and another four years playing arena football, he brings the knowledge and the passion
that youngsters can appreciate and relate.

Of course, it does not hurt that Moreland can whip out the Super Bowl champion ring that went to the
members of the New England Patriots in 2005, which he earned as a defensive back.

Back when he was first named the head coach to succeed Ronnie Millen, who worked at Grady for
28 years and produced 12 consecutive winning seasons before the infamous 2013 season,
Moreland vowed to continue the success of his mentor, who became the fall guy for the
deceit perpetrated by the parents of the 14 players who lied about their residency.

“I know what (Millen) mean to this program and how he strived to build this program up. It’s an unfortunate
situation, but I hope that we can pick up the pieces and move forward and continue to do the things that
he had started here at Grady, which is the winning tradition,” Moreland said back in 2014.

Added Moreland, “I’m going to try and use my experiences from my playing days and my coaching
days, college, professional, and just being an alumnus of Grady High School. Coach Millen did start a winning
tradition here, so I just want to continue that.”

And, as a result of knocking off Woodward Academy, the Gray Knights found themselves state-ranked No. 10
among the elite in Class AAAAA. It was the first time that Grady had been ranked in the AJC since 2011.

In next to record time, Moreland has made Grady High School relevant again. But according to his
QB Newton, Moreland is just getting started.

Said Newton, when he was just a freshman quarterback at the time, “He won’t necessarily change the future
because the future is already bright. He will more so build our future to bigger and better things.”