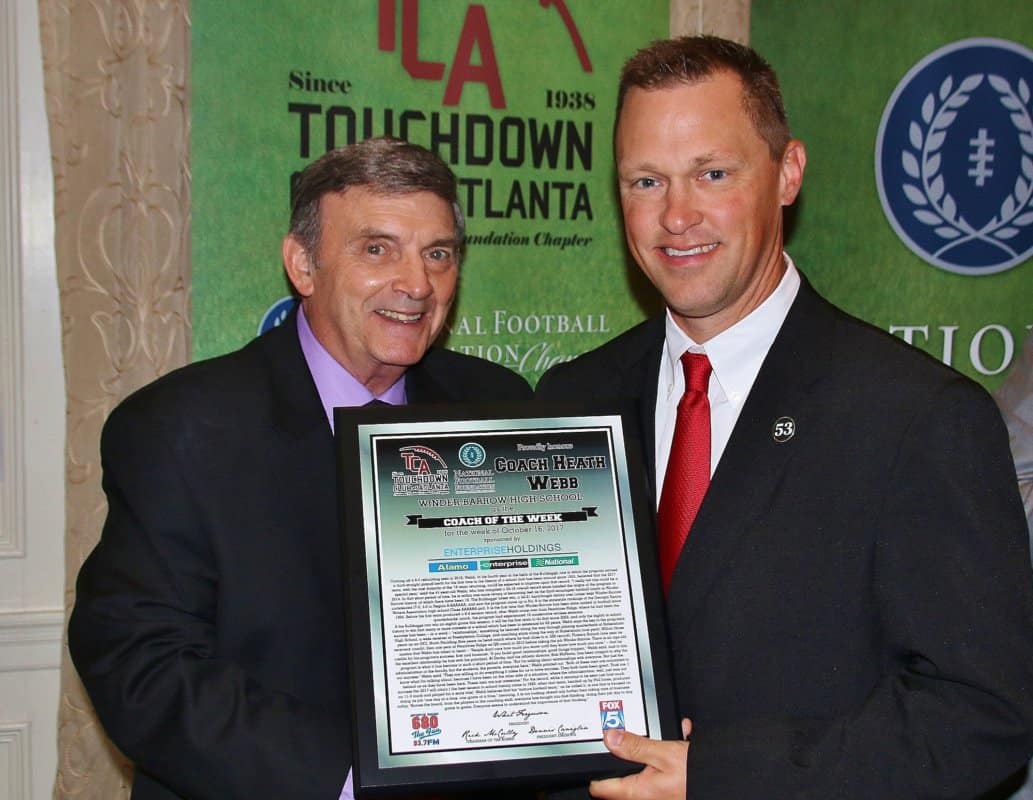 Coach Heath Webb, Winder-Barrow High School as the Coach of the Week for the week of October 16, 2017 sponsored by
Enterprise Rent-a-Car.

Coming off a 6-5 rebuilding year in 2016, Webb, in his fourth year at the helm of the Bulldogs, one in which the program earned a third-straight playoff berth for the first time in the history of a school that has been around since 1955, believed that the 2017 team, with the vast majority of the ’16 team returning, could be expected to improve upon that record.

“I really felt this could be a special year,” said the 41-year-old Webb, who has compiled a 24-16 overall record since handed the reigns of the program in 2014. In that short period of time, he is within one more victory of becoming tied as the third-winningest football coach in Winder-Barrow history, of which there have been 16.

The Bulldoggs’ latest win, a 24-21 hard-fought victory over Lanier kept Winder-Barrow undefeated (7-0, 2-0 in Region 8-AAAAAA, and saw the program move up to No. 8 in the statewide rankings of the Georgia Sports Writers Association high school Class AAAAAA poll.

It is the first time that Winder-Barrow has been state ranked in football since 1994. Before his first team produced a 6-4 season record, after Webb came over from Peachtree Ridge, where he had been the quarterbacks’ coach, the program had experienced 10 consecutive winless seasons.

If the Bulldogs can win an eighth game this season, it will be the first team to do that since 2003, and only the eighth in school history to win that many or more contests at a school which has been in existence for 62 years.

Webb says the key to the program’s success has been — in a word — “relationships,” something he learned along the way through playing quarterback at Habersham High School, a wide receiver at Presbyterian College, and coaching stints along the way at Habersham (one year), Milton (three years as an OC), North Paulding (five years as head coach where he had close to a .500 record), Flowery Branch (one year as receivers’ coach), then one year at Peachtree Ridge as QB coach in 2013 before taking the job Winder-Barrow.

There is an age-old maxim that Webb has taken to heart — “People don’t care how much you know until they know how much you care.” — that he credits for his program’s success, first and foremost.

“If you build good relationships, good things happen,”Webb said, and to him the excellent relationship he has with his principal, Al Darby, and his athletic director, Rob McFerrin, has been integral to why the program is what it has become in such a short period of time.

“But I’m talking about relationships with everyone. Not just the administration or the faculty, but the students, the parents, everyone here,” Webb pointed out.

“Both of these men are committed to our success,”Webb said. “They are willing to do everything it takes for us to have success. They both have been great. Trust me, I know what I’m talking about, because I have been on the other side of a situation, where the administration, well, just was not behind us as they have been here. These men are just awesome.”

For the record, while it remains to be seen just how much success the 2017 will attain ( the best season in school history came in 1993, when that team, headed up by Phil Jones, produced an 11-3 mark and played for a state title), Webb believes that his
“mature football team,” as he called it, is one that is focused one doing its job “one day at a time, one game at a time,” meaning, it is not looking ahead any further then taking care of business today.

“Across the board, from the players to the coaching staff, everyone has bought into that thinking, doing their job day to day, game to game. Everyone seems to understand the importance of that thinking.”