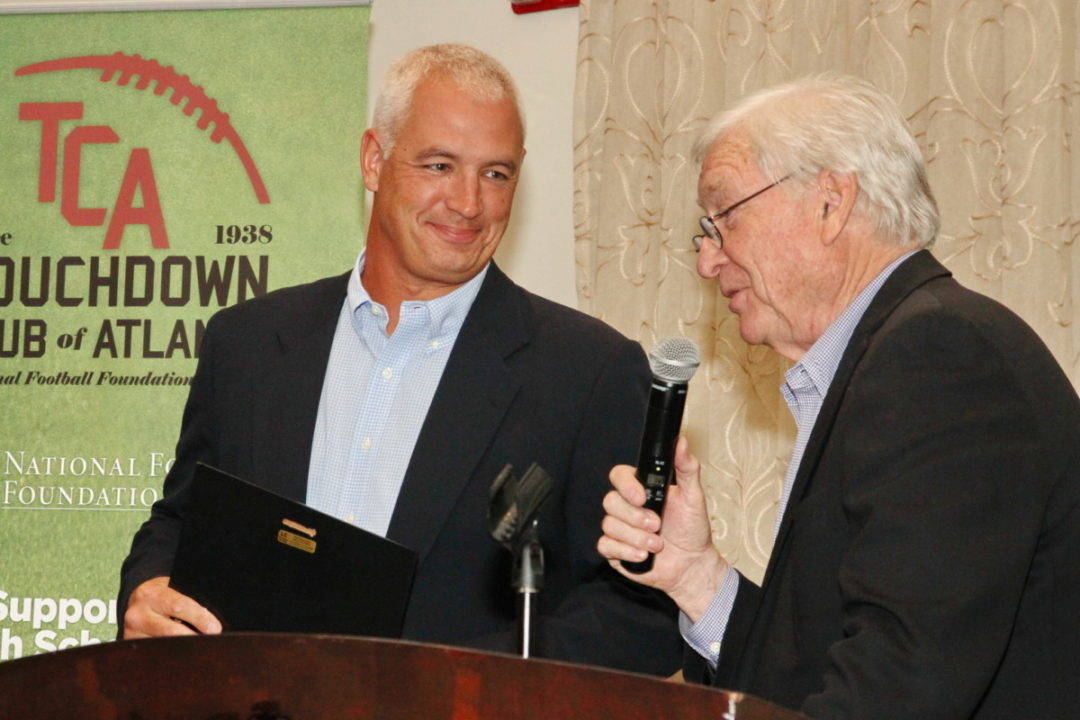 John Small, South Gwinnett for the Week of September 2, 2016.

After having seen his program take its licks for the past couple of years, winning only two games a year
ago and six combined over the past two seasons, Coach Small, now in his 12th year at the helm of the Comets,
had a good feeling about his now 3-0 team coming into the 2016 campaign.

“We’re excited about this group,” Small told the folks from the Gwinnett Daily Post for its preseason run-down
on South Gwinnett. “It’s been a tough two years, but we’ve got the same kids and they’ve been battling
and perserving and sticking with it, and they’re starting to see some of the fruits of their labor.”

After starting the season with a 54-21 clobbering of Central Gwinnett, followed by a 17-0 lambasting
of Lanier, which had a 24-game winning streak in regular season games, but was shutout for
the first time in its history, covering 54 games, the Comets proved unequivocably that they
were for real when they knocked off state-ranked and neighbor Brookwood 14-7 of late, to earn state
ranking for the first time since 2012, and help their coach earn the recognition he is being accorded
at this day and time.

Speaking of precedents, the Comets are 3-0 for the first time since 2009 and their No. 5 ranking
in Class AAAAAAA is the highest since 2003.

Said Small, “It’s the same kids that have been with us, that stuck with it, that didn’t run from a challenge.
These kids deserve everything they’re getting right now.”

And, if the offensive line will begin playing on a par with the defense, Coach Small indicates this Comets
team just might have what it takes to be the equal of the 2010 and 2012 units, which produced 9-3 records
under his tutelage. Maybe even be as good as the 2009 team, which went 10-2, the best record of his
dozen at South.

While South has experienced the same lack of loyalty by a few players over the past few years, as which seems
to be happening in far too many places in Gwinnett and around the state, those that have stayed are seeing the
benefits of playing for a man such as Small and his coaching staff, which are said to be a quality group across
the board, by no less than a Hall of Fame coach such as T. McFerrin, whom Small worked for before being handed
the reins of the program in 2005.

That Comet defense held Brookwood to just 67 yards rushing. And yet one of the stalwarts on that unit is 5-8, 150-pound
senior safety Emmanuel “Manny” Hopkins. “He’s every where everynight. He’s been a great player for us for
three years. He’s not the tallest guy, but he’s got the biggest heart,” Small lauded.