2016, Arabia Mountain, Coach of the Week 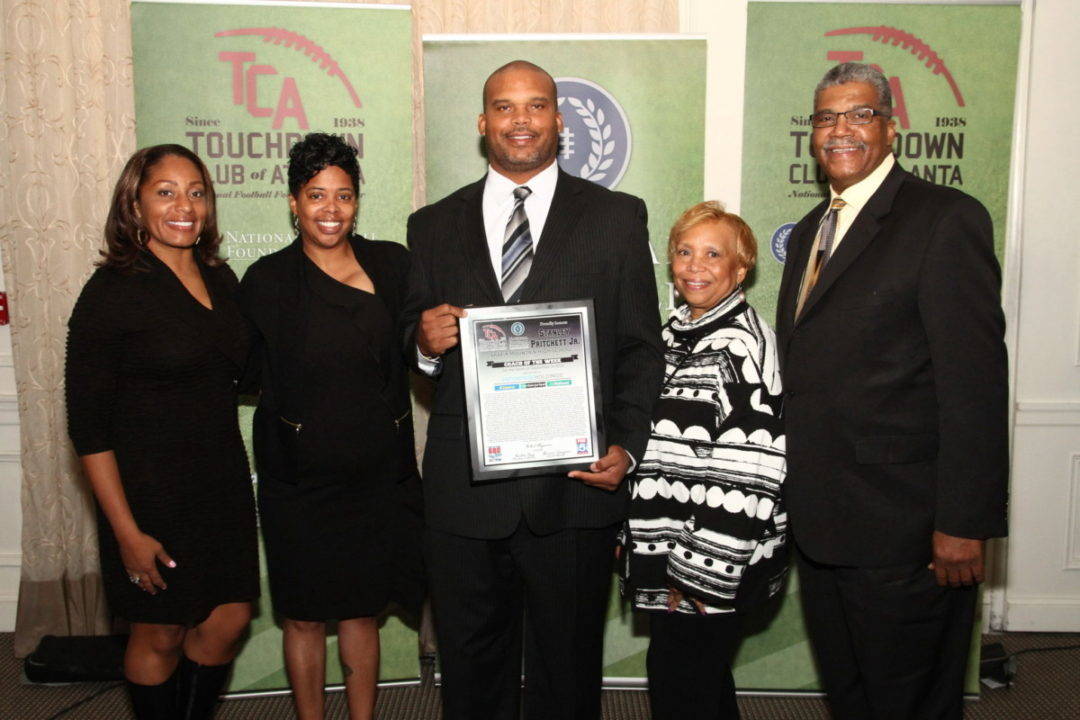 Now almost halfway through the regular-season of his ninth season as a head coach, and fourth at Arabia Mountain, Coach Pritchett, now 43, seems to have found a home in his fourth stop heading up his own football program. And though his overall record is a shade under the .500 mark (40-44) after coaching at Washington and North Atlanta, both in the City of Atlanta, and Westlake, a Fulton County school, before coming to DeKalb County and assuming the reigns of the Rams’ gridiron fortunes beginning in 2013, it appears he has the elements at Arabia Mountain to build a first-class program. “I really like it here,” Pritchett says. “We’ve got good kids, good families, a good community, the kinds of things that are essential to having a first class program on a regular basis.”

A 24-21 win over Dacula by his Rams, which earned him the TD Club of Atlanta’s nod as coach of the week, upped the program’s record on the year to 4-0, only one game behind the longest win streak of the school, which opened in 2009, but did not enjoy its first winning season until Pritchett’s first season at the helm, when that unit won its last five games of the year, yet failed to make the state playoffs. But until the victory over Dacula of late, that team had the program’s biggest win in its eight-year history, a 32-28 win over Mays, which began that five-game winning streak, which, to date, has not been equaled.

Recalling that 7-3 season campaign, which ironically followed a winless season for Pritchett the year earlier at Westlake, he remarks, “That team had a lot of seniors, six D-1 players on that team. It just needed a coach to take them over the top.” At Arabia Mountain today, he does not have that kind of talent. Pritchett readily concedes that he has no D-1 prospects, “but some mid-major guys, four or five, and three to four D-2 or D-3 guys.” Yet, coming off back to back 4-6 seasons from 2014 and 2015, the Rams are obviously doing more with less, so to speak. In fact, Arabia Mountain now finds itself ranked among the elite in the ranks of Class AAAAA, where it is ranked No. 8, its first time to be listed in the AJC’s state rankings. One reason, Pritchett says is because “my kids are resilient. The biggest thing is that the senior class has really bought in to what we have asked of them. They have made a pack and they are determined to make this a special year.” That means, first and foremost, making the program’s first trip to the state tournament.

Another factor in the program’s success is that Pritchett’s assistants include three former head coaches, Marvin Jones and Phillip Noble, both Towers; and Dante Ferguson, Stone Mountain, working with him, each of whom he considers quality men and coaches. While Pritchett, like all coaches, wants to have winning seasons, playoff appearances and victories on his resume, he says, “I don’t care as much about winning as I do about building character in my kids and seeing that they are serious about their academics and doing right; becoming assets to the community.”

So far, Pritchett, who is only the third person to be honored as a player by the TD Club (Douglass of Atlanta, 1991) and also be cited by the 78-year-old organization and recognized later in his career as a head football coach, figures he has seen somewhere close to 35 of his former players go on to earn college football scholarships. And perhaps some will even go on and play in the NFL as he did, when coming out of the University of South Carolina in 1996, as a fourth round pick (118 overall), Pritchett began a nine-year pro career that included stops at Miami, Philadelphia, Chicago and Atlanta, his last stop in 2004.