2016, Coach of the Week, Rockdale County 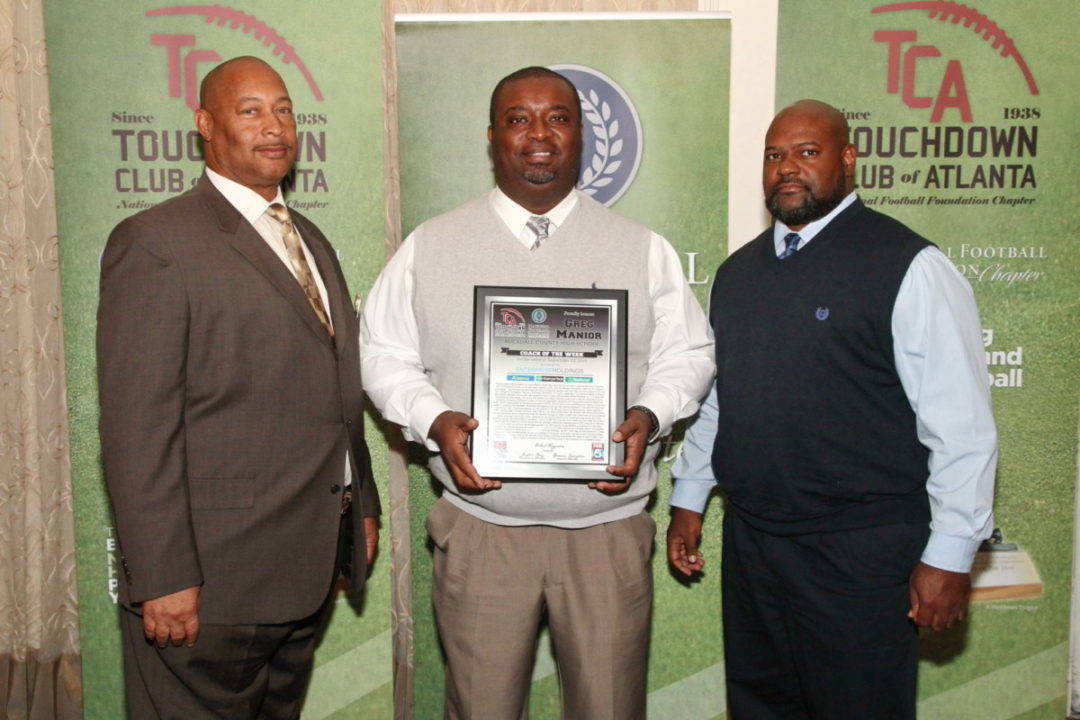 People might have laughed at Coach Manior when they read that he had told a sportswriter that in his first year at Rockdale
County, as its new head football coach, that he believed his players were “on the verge of great things.”

And though his team had lost three consecutive games and had only one win to show for its first four outings of the season,
Manior’s Bulldogs, reportedly a 21-point underdog to Southwest DeKalb entering the contest, shocked the pundits, who predicted such a loss, and knocked off the Panthers 14-13, to earn this accolade for their coach, now in his 13th season as a head football coach and a veteran of 22 years in the coaching profession.

If Manior is able to bring the discipline, structure and organization that he thinks has been mainly responsible
for the lack of success at RCHS, he will have done something that many a coach has failed to produce.

For example, Rockdale has experienced only five winning seasons in the past 20 years and has known only 15
winning seasons on the gridiron in the 66-year history of the program, which opened in 1950, and has seen
19 other coaches come and go over those many years.

But Manior, who has produced five winning seasons, one 5-5 mark and three 4-6 records among his other 12 years
as a head man at four previous stops along the way in his career, believes he can put Rockdale on the proverbial
map as he did at his previous school, Munday’s Mill in Jonesboro, where he left that program much better off
than when he found it.

Manior led the Tigers to a 24-20 record and two straight postseason appearances in 2013 and 2014, with the ’13
team winning a school record eight games and reaching the Class AAAAA quarterfinals in the state playoffs.

Two things that give the coach confidence he can do what others have not been able to accomplish are his coordinators,
Hank Arron, Jr., his OC, and Jamie Baldwin, his DC., both men he has known for a long time and trusts wholeheartedly
for their knowledge of the game, work ethic and all-around coaching skills, Manior said.

On top of that is the attitude of the student-athletes themselves who seem hungry to learn and intent on doing what it takes to produce a winner and bring pride to the program on a consistent basis.

After his first spring practice, he encountered something he had never experienced before, Manior said. “We appreciate
you giving us a good practice,” Manior said one player after another told him. “I’ve never had that kind of appreciation
from kids before, who openly said it was good having a good practice.”

While it might be a stretch to expect Manior’s Bulldogs to earn a playoff berth in his first season at the helm, it
seems likely that they can improve upon the 2-8 record of his predecessor. After all, Rockdale has already
equaled the win total of a season ago through its first five games.