2019, Darlington, Lineman of the Week - Presented by Ortho Atlanta 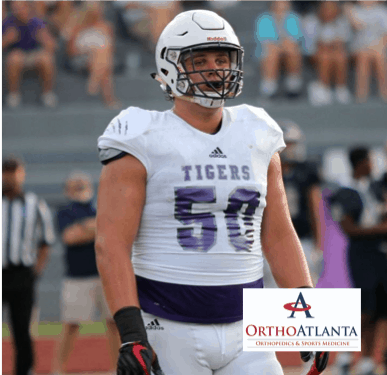 In week 5, Darlington lineman Tate Ratledge was a two-way force in a 57-6 rout over Gordon Lee. Although his future likely resides on the offensive side of the ball, Ratledge also shined on defense where he provided a 25-yard “scoop and score” and the Tigers held their opponents to under 200 yards of total offense. As usual, Ratledge anchored the offensive line that paved the way for a dominant offensive performance which put up a season high in points scored. With the victory Darlington moved to 4-0 and a #4 ranking in the Class A (now 6-0). A five-star recruit, Tate is rated as the #2 offensive lineman in the county, as well as the #3 player in Georgia and #12 overall player in the country. Among many offers, he is committed to play for the Georgia Bulldogs for Coach Kirby Smart and OL Coach Sam Pittman.